The thumbnail – It’s the eighth in the series and the first in the classic format, a country house, a houseful of guests, even a body in the library, and it all happens because William inherits a slightly decrepit shooting lodge from his decidedly eccentric uncle. Uncle was an illusionist, something of a genius in creating optical and mechanical illusions, and the attempts of William, Vivian, Donald and Edge to solve the case are definitely hampered by Robertson Manor’s peculiarities.

This blog was created to provide a preview which you can now see on Amazon itself, but there’s an excerpt from nearer the action, HERE

If you’re new to the Lawns, by the way, the first book (One Two Buckle My Shoe) is on a permanent promo price (cover in the margin, or click on the title) or the first three books are bundled for US$ 3.00  (One To Six, Buckle to Sticks)

OR – because it is the Edinburgh Festival – I have Seven Eight Play It Straight on a giveaway from Thursday for the weekend. 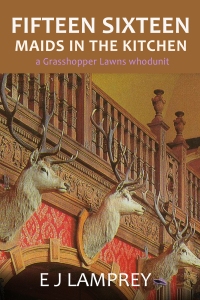 #8 in the series has only 8 days to launch, and wow the days are flying. It’s been over a year since the last Lawns book  was released, for lots of reasons, one being that it was the book I have looked forward the most to writing so you’d KNOW it was going to be the hardest, right?

When I first thought of using the nursery rhyme for the series some names suggested themes, and some  presented obvious problems. Seven Eight, lay what straight? Corpses, seeing the books are whodunits? Nah.  I ended up cheating and making that one Seven Eight Play It Straight and setting it in the Edinburgh Festival and since this is August and we are once again enjoying the Festival, I’m going to put that on promo at the same time as I release the new one. Make a note in your diary. One for nothing and one at launch price? BARGAIN.

I’ve only just worked out how to handle Seventeen Eighteen so now I can get on and write it (Ladies Waiting, unless it changes again) but from very early on two were always going to be easy.  Three Four Knock On My Door, that was a GIFT.  And Fifteen Sixteen Maids In The Kitchen? A little pilot light went on. I would have Vivian and Edge in the kitchen of a country house doing the catering!

There were times I battled with the others when I consoled myself with the prospect of Fifteen Sixteen, because I knew with that conventional setting, that country house, that body in the library, it would write ITSELF. Ha. I am a prolific and speedy writer, and the books are novellas, and the book was written nearly a year ago but – not quite right. It didn’t work. I put it aside and wrote something else (as Joanna Lamprey). Went back to it. Still couldn’t get it right. Wrote something else (as Clarissa Rodgers-Briskleigh). Went through a bit of writers block as well, which is the equivalent of a runner getting a stress fracture and not being able to run for a while, and is horrible.

Finally the book relented, turned smooth, the rewrite was a success and all was well with the world, it was, finally, as much fun as I had always thought it would be.  The alpha readers liked it. The beta readers liked it. I sent it off to the editor and turned my attention to one thing both the alpha and beta readers had requested – a floor plan. This is a houseparty of thirteen, after all, and they all said a floor plan would be invaluable.

My floorplan still looked like something drawn by a writer with no architectural training whatsoever. Almost in tears I turned to a friend who is a professional mapmaker, who in an hour or two turned my tatty sketch into something I could fiddle with and mess up again. Excellent!  Here’s the upstairs plan, with guests who are mainly writers. (My four main characters, Edge, Vivian, William and Donald, are downstairs)

Except . . . some of the action in the book happens in passageways. All that simplifying, I had removed nearly all the passageways downstairs.  I was left with the open-arch walkway around the hall, and that was IT.

This is what that walkway looks like at Kinloch Castle, by the way, which was originally a shooting lodge, hence all the deer. So was Robertson Manor, which I promise does not have exotic metalwork or a baboon-eating eagle statue, although it does have a very elderly stuffed eagle. And, since it was also once a shooting lodge, deer.  There are living ones, too, which are relevant and play a role and don’t get shot. 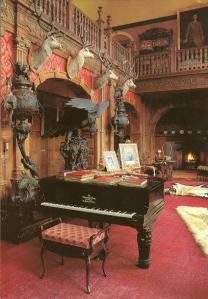 So there had to be some fairly agitated rewriting. I think the book is actually the better for it. I hope so, anyway. The countdown and link to pre-ordering will be in the next blog, which in theory (gulp) is tomorrow. Or the next day.

I have a friend, Edge Cameron, who is slim, attractive, talented, funny, financially comfortable, and in a relationship with a man she adores, who loves her. Well, I call her a friend. Sometimes I resent her a bit. Even though I invented her.

There are times I find myself, almost to my own indignation, copying her.  She joined a singles website, so did I. She has shoulder-long thick red-blonde hair, I grew mine and if anyone can tell me how to thicken it, that would be lovely, ta. And because we’re both autumn roses, the colour isn’t as robust as it once was. She has hers expertly streaked by an expensive hairdresser (see financially comfortable, above).  Mine is streaked with, well, I called them blonde threads.

And the streaks, from being occasional threads, have been a bit invasive lately. In direct sunshine, I’m rather less strawberry and rather more blonde. Fortunately there’s not been much direct sunshine in Scotland this year (sigh) but still. See for yourself –

So I ordered that colouring stuff which is personalised for your exact hair colour (medium blonde copper pearl, said the expert) and it arrived during the week and I just used it and it has gently returned to where it should be.  Not a flat colour, still naturally varied, less silver, YAY!

Oh, I know I will be silver soon enough and I’m genuinely okay with that but there’s two more books in the series still to write,  and I am damned if I am going to slave over a hot keyboard with silvering hair letting Edge look younger than me while I do it.

BTW, that marketing thing I’m rubbish at, I should probably mention that Fifteen Sixteen Maids In The Kitchen is imminent. In a week. I should be working on that rather than playing with my hair.

Now that I’m rejuvenated, I’ll get straight onto it.